Hadi Teherani is one of the most familiar and respected names in contemporary German architecture and design. His characteristic approach to the medium communicates atmospheric charisma, emotional urgency and an acute awareness of social responsibility and sustainability. All these attributes reflect Teherani’s desire to establish a positive dialogue between his buildings and their surrounding environment.

As the architect behind Cologne’s globally celebrated Kranhaus, Teherani has a well-deserved reputation for designing audacious structures which fast become landmarks. Always looking to challenge perceptions and expectations, his latest building, a high-end residential and commercial complex named Flare of Frankfurt, is a physical distillation of his aesthetic philosophy.

An Appetite for Luxury

Last year, Frankfurt am Main scored one of the highest ratings in estate agency Knight Frank’s benchmark, Prime Global Cities Index. This report highlights the performance of luxury residential prices across the world, with the major business hub recognised as one of the fastest growing areas for luxury property.

Teherani is no stranger to this market, having designed many now iconic residential apartments across the globe. Furthermore, he approached the project with a deep understanding of Frankfurt, especially its urban layout and culture.

In the city’s densely populated centre, where space is at a premium, Teherani had to work intelligently to maximise on the client’s (Strabag Estates) ambitious brief for an achingly cool, ultra-modern combination of hotel, apartments and commercial space in a single complex.

From the outset, the design concept for Flare of Frankfurt had to strike a fine balance between a robust, durable structure and visual appeal. Importantly it also had to relate and respond to the surrounding buildings, yet be individual enough to stand out from the crowd.

The client was very clear they wanted a building with original exterior design elements to create an eye-catching aesthetic statement. This meant adopting an unusual and alternative approach to Flare’s cladding, dispensing with the standard, flat panels which typify many multi-storey buildings.

Teherani applied his signature, holistic approach to façade design with a desire to create something both functional and emotionally appealing.

After drafting a number of different concepts, the architect eventually decided on an angular, three-dimensional design for the façade panels. This would give the building singular points of visual interest, but also complement the area around it.

As has been noted by the media on many occasions, Teherani is fascinated by new materials, recognising their potential for greater creative freedom and flexibility than traditional building products.

For Flare of Frankfurt, he was particularly interested in the properties of Sintered Stone and its suitability for the urban environment. With high levels of resistance to staining and pollution, combined with being both lightweight and waterproof, it was ideal for handling the hustle and bustle of the metropolis.

From a style perspective, the architect opted for an understated palette, allowing the façade’s raised geometric shapes to stand out without becoming loud and overbearing.

Neolith®’s Arctic White Silk was specified after many options were considered. Teherani felt offered greater scope than any of its competitors.

Furthermore, Germany has a number of strict building codes and regulations which needed to be taken into account. Neolith met all these criteria.

Approximately 6000m2 of Neolith slabs were used, cut to size according to the blueprint specifications. The 6mm thick surface was applied by curtain wall specialists Lithodecor using a sandwich construction.

According to Lithodecor’s Head of Product Management, Philipp Wirtz, who worked directly with Teherani to bring his complex ideas for the façade to life, the project was not without its challenges.

The high-end façades market is growing rapidly across Europe, with many more developers looking for tailored and bespoke solutions. Flare of Frankfurt is a stand-out example of this trend. It represented a very good test of our skills and abilities. One thing that struck me was the manufacturing of the panels, subsequent transportation to the site and their physical application.

This project required a high level of prefabrication due to the specification of the panels we were working with, these were storey sized (3.10m x 11.50m). As such you can imagine the care we had to take to transport them through Frankfurt’s busy streets without damaging them. Once there we literally hooked these onto supporting steel beams, a process requiring a high degree of precision, using our own proprietary technique, Lithodecor Airtech System.

As you can see from the finished structure, we were able to overcome these difficulties to deliver a building with real character. A fantastic addition to Frankfurt’s diverse architecture

In terms of Neolith, there’s little competition when working on this type of façade project. It outperforms on all levels and in my opinion, the building will look as good in ten years as it does now 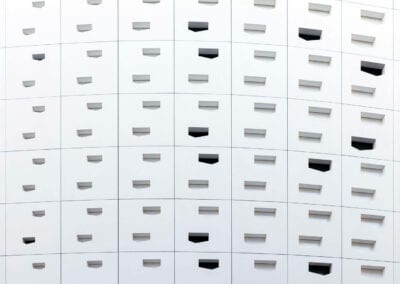 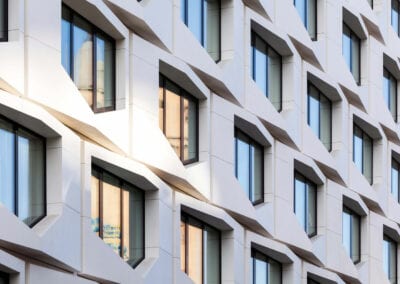 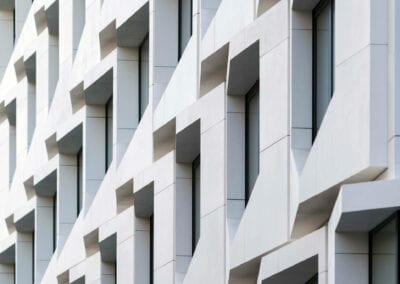 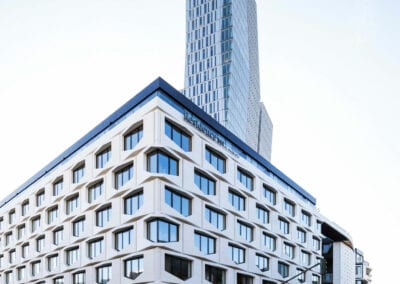